I finally got an ide(a)

Finally that exhausting heat wave has gone away and temperatures have dropped from 32'c to 12'c. There was thunder and rain today and I just had to go fishing on a little remote river nearby.

I grabbed my 2wt 6ft rod with me and started my fish-mobile. Fifteen minutes later I was standing by the river, tying a small orange leech to the end of the tippet. First cast to the narrow, faster stream and bang, fish on and then it got away, just after a few seconds battle. I managed to identify the fish, it was an ide, in the ~35cm range. For some reason, they have been totally lost for a couple of years but now they are back!

On the next cast, a little perch swallowed the leech and I quickly released the little bugger. Third cast to the narrowest point of the stream and again, Fish On! This was clearly a bigger ide this time and I really had to fight it and the current with that macaroni-like 2wt rod. Finally the fish was ready to be quickly measured and released. Nice looking ide, 42-44cm range but skinny as hell. Nice start for the trip anyway!
I moved a little and started chasing some perch. And boy, did they bite! They were absolutely crazy and hit the fly immediately when it sank to water. I didn't even keep any count on those little buggers, they ate the fly on each cast in less than 5 seconds. And they were absolutely everywhere.

I got bored with those little perch and moved on to the small, slowly running brook. I didn't expect to catch anything from there, but still decided to give it a go. First cast and first fish on in a few seconds. This perch was a little bigger, in 250-300g range and I had to play it a little to get it landed and released. Another cast, another fish, a little ide this time. I slowly walked along the narrow stream and caught a few fish from each spot, mainly ide and perch. As a last spot, I fished the lower side of the rapids and managed to catch a few small breams. I had high hopes for catching those big 2-3 kg copper-colored breams just like in the old days. Needless to say, I wasn't that lucky. 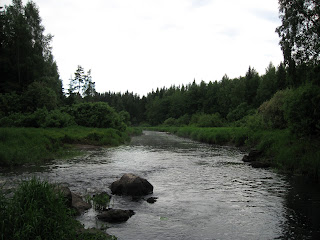 After punishing those buggers for two whole hours, I decided to call it a day, walked back to my fish-mobile and headed home. It was good time to end a day.
Posted by Jabala at 9:47 PM

Jabala
I'm a 29 year old software engineer, specialized in embedded and hardware related software development. I work in the HVAC and building automation field as an R&D engineer and project manager. Fishing and hiking in the nature is a good way to get out of the office and turn my thoughts away from the work.